Ola and Przemek built a house that is powered only by the sun. They breathe clean air, they don’t have to worry about mould, and their energy bills are ridiculously low.

We had a flat in an apartment block. I had been a bank manager for many years; Przemek used to work in the military, and then he opened his own motorbike garage. I enrolled for culture studies and took up a position as a kindergarten teacher. We thought we’d like to live in a house. And so we started to look for the land. We almost made a wrong choice twice, but my dad saved us from the first mistake, and my mum, who is a forester, stopped us from making an offer on the second plot. They noticed something sketchy in both cases, and they were right. In fact, none of this would’ve been possible if not for my parents. They threw some money in for the investment too. Third time’s a charm – we found another plot for sale close to the previous two, and it turned out to be perfect. There was no looking back. We sold our flat and got a mortgage (no easy feat either, as the banks were wary of my health problems). But we made it. We could get started.

Now we needed a house plan. We didn’t like any of the designs we found in catalogues though. We wanted something simple, and all those plans were overcomplicated. Someone recommended Piotrek from Green Collective. We met up a few times and soon found a solution we liked. Piotrek is a saint. He creates environmentally-friendly, passive house projects. And he practices what he preaches: he’s absolutely devoted to his work and the Earth. We used one of the blueprints Piotr had available. Before we reached the end of the design development phase, he turned to my husband and said he thought that Przemek could handle the whole thing on his own. “You can build it yourself”, he said. “It’s easy.” I looked at Przemek. He was a bit frightened, but he looked back at me with conviction. We had hope, and we were willing to act. Let’s do it, we said. 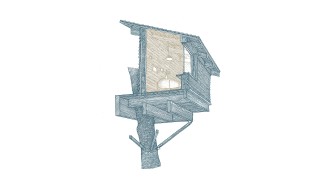 Media / Audio
Our ancestors lived in trees millions of years ago. Perhaps that’s why humans seem intent on returning to them. Original publication by Łukasz Stępnik.
Czytaj

Reading / society
Building a tree house from wood should be an easy task, if you follow this architect’s simple instructions. Łukasz Stępnik

Laying the foundation base turned out to be the most stressful part. We hired only four people to set up the foundation slabs. We did all the rest with no professional help. We made the formwork and we poured the concrete ourselves. Our friends helped us build the gable-end walls. Everything here is made of wood. The structure is glued timber, the partition walls are solid construction timber, and all interior wall linings are made from Siberian spruce boards. For exterior cladding, we chose vertical spruce thermowood panels. It’s great because it doesn’t need impregnating at all. The exterior walls are 50 centimetres wide. Can you guess how much of it is insulation? 45 centimetres! It’s made of wool wood. We had it pumped in with special machines between membranes under 11 atmospheres of pressure. For flooring, we chose spruce panels, except for wet spaces – we opted for impregnated ash boards there instead. Next came the windows. We went for triple panes because that was the only way to meet the passive house criteria. It should also be noted that we didn’t waste a thing. The table we’re sitting at was made of leftover cladding boards. Same goes for the kitchen shelves. For wall covering above the countertops, we used spare pieces of diamond plate. As for the bathrooms, we went for thermo-spruce again instead of glazed tiles. It’s used for sauna walls for a reason.

When the lady from the National Fund for Environmental Protection came over to check all the parameters to see if the house was passive enough to qualify for funding, she spent 12 hours here. The first result of the heat transfer coefficient test was so low, she thought her measuring devices were broken. After 12 hours she measured everything again. Same outcome. Everything was at an astonishingly low level. She was baffled. You know what, we always used to be allergic to one thing or another. We’d catch a cold all the time. And now: nothing. Since we used only the highest quality natural materials, the air here is remarkable. No mould, no constant temperature swings. The recuperator supplies clean air, and everything smells of fresh wood.

It was the spring of 2017 when we moved in. We’ve been living here for almost a year now. We can still remember our first night. Everything was still raw and makeshift. But what a year it was! Would you believe that in November, which was our coldest month, we only spent 30 zlotys (£6) on heating? And that’s just because the winter was a bit lousy; pretty dark. We prefer frosty weather. Then the sun comes out, and the temperature inside the house stays at 20-23°C without any heating on.

But nothing is perfect. For example, when we published the pictures of our house online, they were met with a wave of negative comments. The haters on some websites were saying the wooden walls inside are ugly, that everything looks like an old mountain hut. But we chose it because the planks give the light a lovely warm glow and because we could set them up ourselves. We wanted to do everything with our own hands, and since we have never plastered a wall, that was our only option. People also criticized the exposed cabling on the walls. And we like it very much this way. They run around the house like a well-planned labyrinth. Przemek had every detail thought out. All installation accessories are visible. It’s all stately and black, ending with a lever switch. Of course, it wasn’t cheap, but we didn’t try to cut any corners, because we prioritized quality. You have to spend money to save money, even though it might seem counterintuitive. People don’t get it. Sorry, we’re talking money again. But that was another point of criticism. Apparently, 400,000 zlotys (£80,000) is an outrageous sum to spend on a 100-square-metre house. People wrote that it could be done for way less money. But does it really pay? We already know we won’t have to fix or change a thing here for the next 30 years. And this sort of budget is hardly enough to buy a studio flat in Warsaw.

I teach at a Montessori school. I work with little kids, four-year-olds. We teach them responsibility. We don’t spoil them, but we treat them like our own. And guess what? Those children clean up after themselves, make their own breakfast and serve the food without help. Even fussy eaters will finish their portions if they get a chance to prepare the meal and put it on a plate. We only give them the tools. We might show them how to do it at first, but they take it from there, and they manage just fine. At our school, we can give a sewing needle to a toddler, and they will know how to use it later. And as I’m telling you about it all, I can’t stop thinking it was the same for Przemek and me. When we picked up the tools to build our house, we took matters into our own hands. Like those children, we just believed in ourselves. We turned an impossible dream into our new home. A beautiful, smart home. It turns out anything is possible if you want it bad enough.

As told to Zygmunt Borawski.

Media / Audio
Our ancestors lived in trees millions of years ago. Perhaps that’s why humans seem intent on returning to them. Original publication by Łukasz Stępnik.
Czytaj

Reading / culture
The lofty peaks of the Alps have long had elitist appeal. This might explain why Grażyna Kulczyk decided to open Muzeum Susch among their rarefied atmosphere. Stach Szabłowski
Zobacz 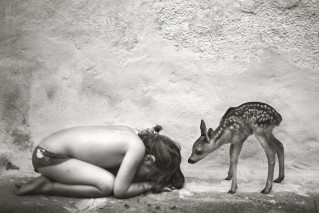 Media / Photo
Alain Laboile, photographer and father of six children, is the creator of a testimony to the everyday celebration of blissful childhood.
Newsletter