“What can you eat instead of meat in autumn?” Well, first, why ‘instead of’? The very question denigrates plant-based cooking! However, here I am, dear editor. Since the question irritates and fascinates me in equal measure, I will stop whining and instead try to find the answer.

The astronomical autumn begins on 23rd September and lasts until 22nd December. The mean October temperature in Warsaw is 8.5°C, in Jelenia Góra it’s 8.6°C, and in Suwałki it’s 7.2°C. That doesn’t sound so bad, but there are days in autumn when it’s –5°C. So that’s my first lead: when it’s cold, dark and rainy, we seek food that warm us up. However, many people still wrongly associate meatless cooking with cold salads.

If you really want to warm up, instead of meat you can, for example, cook a green pea soup with smoked paprika. First, soak a lot of green peas. Then in a large pot, fry onion with savory, bay leaf, allspice and, of course, smoked paprika – a truly magical spice that provides a wonderful smokey, slightly hot flavour without the necessity of using sausage. You can get it in any large shop; one packet costs around 70p, and even if you use it often, it will get you through both autumn and winter. Afterwards, add the green peas, vegetable stock or water, and cook everything until the peas are soft.

If you prefer stews instead of soups, there’s always oyster mushroom goulash. It’s a dish fit for royalty, perfect for warming you up! First, heat some oil in a large pot. Fry two onions with a lot of paprika – smoked, as well as hot and sweet – and a little caraway. As soon as the onions get soft, blend them into a paste (that’s a crafty Hungarian trick for thickening a goulash). Then in the same pot, fry a lot of sliced oyster mushrooms. Add some red wine and the goulash onion paste. It tastes delightful, especially with buckwheat groats.

There are also methods of getting warm from further afield. For example, daal – an Indian dish consisting mostly of lentils with coconut milk and spices. Simply rinse the lentils and simmer until they are soft (which should take about 15 minutes). In the meantime, fry an onion with turmeric, cinnamon, cumin, or any other spices you like. Then add it to the hot, soft lentils along with coconut milk. Cook it briefly, add some salt, and it’s ready. Daal, just like bigos [hunter’s stew, a Polish dish of chopped meat stewed with sauerkraut and shredded fresh cabbage – ed. note], tastes better with each passing day. To sum up, there is hope for those who want to warm up and fill their stomachs without meat. However, some may fear boredom. It’s hard to eat just three dishes over and over again through the whole autumn. So, let’s think about what else you can buy instead of meat. 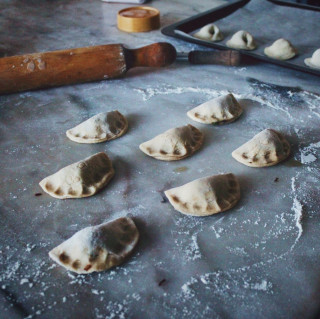 Magazine / society
The act of inheriting recipes is tied intrinsically with culture. It occurs not simply through remembering a technique, but within an unspoken sensory and emotional realm. Monika Kucia

Autumn cooking should be based on seasonal vegetables, of which there are many. First, there’s the versatile pumpkin. Those who lack confidence in the kitchen can start with a simple soup made of baked pumpkin. Heat the oven to 200°C, then bake the pumpkin for an hour, or until it’s soft. Pick out the flesh with a spoon and blend it with vegetable stock, smoked paprika, hot paprika, a pinch of cinnamon, and a couple of spoonfuls of lemon juice. More experienced cooks can use pumpkin as a stuffing for Italian cannelloni, for lasagne, or as an addition to béchamel sauce.

Second place goes to cabbages: savoy cabbage, red cabbage, brussel sprouts, broccoli, cauliflower, kohlrabi or kale. It’s really easy to make some great soups from them. For example, cabbage soup with apples, or cream of red cabbage and plum. I encourage you to bake the cabbages, as it makes them absolutely delicious. First of all, let’s try baked cabbage with beans and plum jam. Just cut the cabbage up, mix it with white beans from the can, add some oil, a lot of salt and pepper, marjoram, lovage, savory, and a teaspoon of plum jam. Put it in the oven and bake for 45 minutes. You can either serve it hot with nuts, or cold the next day.

In third place, it’s root vegetables. I’ll only mention the most popular ones: beetroots, carrots, parsley, parsnip, celery, rutabaga and turnip. This group of veggies is best enjoyed baked. If you boil root vegetables, they’ll be bland and boring, as most of their taste will be left in the unused water. When baked, however, they change beyond recognition. They become sweet, smoky, feisty and spirited. You can turn them into goulash or soup. More traditionally-minded people can cook a fantastic barley soup using baked potatoes. For globetrotters, there are cream soups with coconut milk and ginger.

I’ve already suggested a lot of soup recipes, so here’s how to swap ham out of your sandwich: paprika baked vegetables. Simply heat the oven to 200°C (root vegetables like heat), cut up two carrots, an onion, some parsley and a quarter of celery. Next, rub it all in oil, sprinkle with salt and bake for 25-35 minutes until everything is soft. In the meantime, check out whether you have any leftover rice or groats in the fridge – if not, cook some. Blend the vegetables with a spoonful of tomato paste and a lot of paprika (sweet, hot and smoked). Then add rice, salt, soy sauce and pepper. This dish goes especially well with pickles.

Just off the podium, there are mushrooms and autumn fruits, as well as non-seasonal products such as groats, nuts, beans and pickles. I’ll skip the last three – there’s not enough space in “Przekrój”. However, I’m thinking of another lead. One can suspiciously ask whether eating meat goes against traditional Polish cuisine. After all, if you’ve been eating pork chops and ham hock your entire life, replacing them with a baked carrot may seem like an eradication of culinary heritage.

The answer can be found in one of the most famous books on Polish cuisine, published in 1868. I’m talking about 365 obiadów za 5 złotych [365 dinners for 5 zlotys] by Lucyna Ćwierczakiewiczowa. Among her all-year-round cookery suggestions, Ćwierczakiewiczowa lists: potato chops with cucumber sauce, green pea pudding, and kale with chestnuts. For even more examples of proud Polish meat-free cuisine try Kosowska kuchnia jarska [Kosowska Vegetarian Cookbook] from 1929. What feasts! Just look at these autumn meals: stuffed tomatoes with dill sauce, greengage kompot and yeast fingers; potato pâté; kohlrabi with croutons and cabbage blinis; cabbage blancmange with mushroom sauce; plum soup with potatoes; and vegetarian roast with tomato sauce. You’ll also find many forgotten recipes for puddings, gruels, małaje (made of dough and cheese), mămăligăs, orgeat syrups (made of almonds plus rosewater or orange water), and light soups. The regional dishes alone present many forgotten meatless meals that used to be staple foods: fuczki (flat-cakes made of sauerkraut, from the Bieszczady region) and ruchańce (drop scones popular in the Kuyavia region), sour oat soups, borschts, prażuchy (made of potatoes and flour), mushroom kvasses, hołubce (cabbage leaves stuffed with buckwheat), beans, peas and fava beans baked in myriad ways, and finally my beloved towkanica (a baked potato casserole).

We can assume that the repertoire of plant-based autumn meals was once much broader. It’s possible that many traditional Polish dishes were vegetarian until recently, when we started adding chicken breasts to them. Who knows, maybe in the past, articles such as this one were unnecessary, because any housewife, if asked what to eat instead of meat, would have simply answered: anything else. 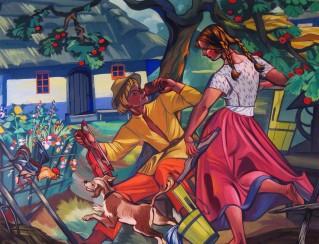 Be Like Anastasia
Life in a New Age Slavic Homestead

Magazine / society
Anastasianism (or the Ringing Cedars) is a new age religious movement that started in Russia. We visit one of its kinship homesteads to find out how to heal the human civilization. Ewa Pawlik
Czytaj