Once upon a time we used to have real winters – in the 20th century, the lakes of the Masuria region of north-east Poland would be frozen solid from November to April. You could cross the thick ice floors on horse-drawn sleighs, while fishermen used axes to cut holes in the ice the size of their country houses. Every once in a while, you would see the white sails of special ice yachts upon the frozen water.

During the period between the two World Wars, the village of Ogonki – set upon Lake Święcajty (when it was called Schwenten) – was the European capital of ice sailing. During the international regattas held there in the 1930s, almost 120 vessels would come out to perform. Archive footage has survived from those times, a film called Tanzende Kufen [Dancing Sleighs] showing just how popular and highly developed the sport of ice sailing had become. Wilhelm Siem’s black-and-white photos transport us to the iced-over surfaces of the Masurian lakes – 80 years ago, the setting for competitions between the best ice sailors from Germany, the USSR, Poland and other Baltic States.

George Tepper, the owner of a local lumber yard, made waves when using a wooden ice yacht he had constructed himself to beat the ice speed record, reaching up to 140 km/h. Some thought that his Feuervogel (Firebird) was captained by a German air pilot called Storch (aptly enough, the word means ‘stork’ in German), although this does not alter the fact that the performance was nothing short of remarkable. Today’s record stands at 170 km/h on a modern ice yacht, built using the lightest, most innovative materials available.

A super ice yacht from Detroit

Ice sailing was initially used to transport people and goods. The first generation of vessels combining boats and sleighs were created at the start of the 17th century in the Netherlands, which is where the Polish name for the craft comes from: bojer. Dutch emigrants took the know-how of building such vessels to the US, and were responsible for the sport reaching the rest of Europe in the early 20th century, becoming remarkably popular in East Prussia.

Back in those days, the best known model was the Monotype XV, designed by an Estonian craftsman called Erik von Holst, who in turn taught Tepper. In 1937, the American daily Detroit News announced a competition for a new ice yacht design that could be built by expert craftsmen in their own homes. One of the entries, called Blue Streak 60, was crafted by Archie Arrol. It was an elegant, one-person craft sitting on three ice blades, powered by a single triangular sail. The design was slick, cheap and easy to build. Once its design instructions were published by the Detroit News, it came to be called the DN, and quickly replaced older designs. To this very day, the DN class is the most popular form of ice sailing in the US.

You don’t simply sail, slide or ride in an ice yacht – you fly. With favourable winds, there is little problem in achieving speeds of up to 80-90 km/h, steel blades providing purchase upon the ice, offering minimal resistance. This form of light construction offering rapid acceleration akin to that of a race car – the steersperson lying a few inches above the frozen surface of the lake – really does supply the sensation of flying.

Before starting to fly, you first have to get the craft going. The best way to do this is a short sprint – the steersperson must jump into the craft and lie down in the narrow hull. Once the craft picks up speed, you then have to adjust the sail to meet the wind. Steering is achieved by adjusting the front ice blade, moved with the feet. The hands control the mainsail above the head of the recumbent pilot – a technique reminiscent of those who sail or windsurf, perhaps even more so the latter, as ice yachts also use similarly shaped single sails. 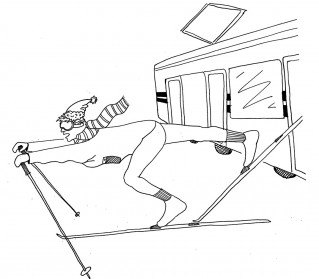 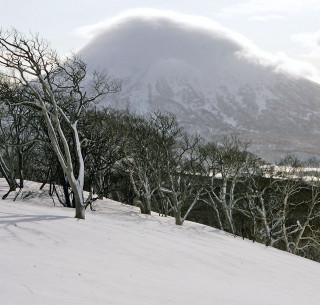 Magazine / society
During winter, abundant snow in the north of Japan offers plenty to skiers and snowboarders. But that’s not the only reason why you should visit the country’s slopes… Wojtek Antonów
Czytaj

And yet ice yachting is a sport that demands a specific form of mobility – after a day spent in the prone position, all of your muscles are liable to hurt.

…as it should be – it is winter after all! Some compare the process of ice yachting to sticking your head out the window of a moving car in –10°C temperatures, driving through falling snow. There is a lot of truth in this, and yet fans of ice yachting are not in short supply. “There is no such thing as bad weather – there is only clothing unsuited to the conditions,” claims Andrzej, who has been ice yachting for 40 years. He also recalls how during –30°C conditions, he sewed himself a thermal overall out of his grandma’s bedding. In the end, however, he didn't make use of it, as it made him feel... too hot. Today, through using (several layers of) modern thermal undies and skiing suits instead, he can easily manage a few hours out on the ice. “While flying, I don’t feel the temperatures, as the adrenaline and physical effort distract me. The problems only start when I stand around chatting for too long,” Andrzej adds, and runs off in the direction of the lake with his DN 60.

Ice sailors tend to wear thick gloves, warm boots with soles that grip the ice (or even with crampons attached), skiing goggles, and a mandatory helmet. The frozen lakes are not a smooth surface, but can be covered in ice blocks or cracks, which can lead to accidents; boats being overturned. Such accidents do not occur here any more often than in other winter sports. Even so, ice yachting is considered to be an extreme winter sport, though more for the emotions it arouses and the speeds attained.

The best sort of weather for ice sailing is created, of course, by sub-zero winters. Constant freezing temperatures ensure a thick and stable ice flooring on the lakes, offering safe flying. The decision of whether the ice sheet is thick enough and weather conditions are safe is best left to those who have extensive experience in the field. In other words, it is best to fly where folks such as Andrzej take off first.

Skipper on the ice

For a long time, Poland has occupied pride of place in the standings of world ice yachting competitions. Karol Jabłoński is a legend in the field: he is still sailing after many years, successful in prestigious yachting regattas, and a former captain of numerous pro sailing teams (although few know that he is also a 12-time world champion in flying across the ice). Poles often join him on the podium, such as last year in the European championships, when Poland secured the first four spots in the DN class. In spite of this international success, ice yachting is still seen as a niche sport/hobby in Poland. It is rarely mentioned in the media – a shame considering that there is plenty to be celebrated. It is a tough discipline, both technically, as well as physically. It takes sacrifice to compete at world class level. Then there are the costs involved, seeing as the ice yachts eligible for regattas cost the same price as a mid-class car.

On an icy Sunday on the Charzykowski Lake near Chojnice, where in the 1950s the first Polish DN class vessel was built, you can meet tens upon tens of ice yachts. Last year during the Polish national championships, over 100 yachts took part. Flying across the ice, you will find vintage Monotype models, various DN class types, and also windsurfing kits with ice skates attached. There is no shortage of home-made models crafted by fans of the sport, who then happily share their know-how on the internet. “The build took me three years, yet now I have one of the fastest ice yachts in the region. The GPS read-out confirmed I was flying at 120 km/h, and yet I know we can do better,” says Wiktor, who built his craft using plans left by his grandfather. He did, however, swap the wooden materials for plastic, and used a more modern flexible mast.

You can meet ice yachting enthusiasts all over Poland, though the main centres of the sport are around the Vistula Reservoir, Czychow Lake, or else Śniardwy, Mikołajskie and Niegocin in Masuria. In all of these places, businesses catering to those wishing to rent ice yachting equipment are open during the winter season, frequented by people who can help us understand what all the fuss is about.

One of the most popular ice yachting locations is the Zegrze Reservoir, 30 kilometres from Warsaw, where every weekend, if ice conditions are suitable, you can attend a course offering an ice sailing licence. Even though licences have not been required by law since 2006, it is worth beginning your ice-flying adventure by passing the basic tests.

Translated from the Polish by Marek Kazmierski

Magazine / society
During winter, abundant snow in the north of Japan offers plenty to skiers and snowboarders. But that’s not the only reason why you should visit the country’s slopes… Wojtek Antonów
Czytaj 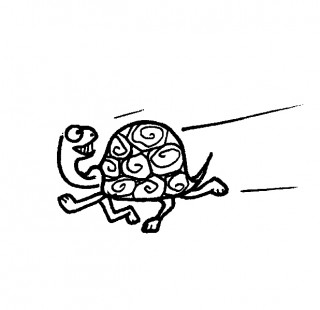 Sprinting Towards Infinity
Can We Predict the Limits of Human Speed?

Magazine / society
Usain Bolt is currently the fastest man on Earth, but can his 100m record be beaten? We explore the limits of human sprinting potential. Piotr Żelazny
Czytaj 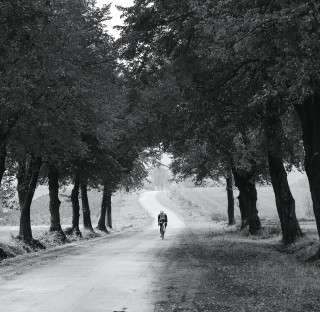