Zmień na wersję polską
Newsletter
Przekrój
After a long day at work, there’s nothing like stroking our furriest of friends for a spot of relaxation. ...
2019-12-22 09:00:00

We love cats for their beauty, softness and warmth, as well as the lovely sound they make when happy. Mikołaj Golachowski sings a paean to cats – those sweet murderers and majestic anarchists whose purring makes wounds heal faster and illnesses easier to treat.

If you are on close terms with even one cat, you will probably admit that this situation is easy to imagine. Among all the animals that we consider domesticated, the cat is the only one that doesn’t contribute to our survival in any way, at least not in any practical sense. We love cats for the fact that they are pretty, soft and warm, and make a great sound when they are happy. Therefore, we joyfully do everything we can to ensure their happiness. So, who domesticated who?

At the outset, I must declare: I love dogs. One of my best friends in my teenage years was Bilbo, a fantastic mongrel roughly the size and character of a Malamute. In my defence, I will add that it was several years before the first part of Lord of the Rings was adapted for the big screen. We went through numerous great adventures together and another dog will certainly appear in my life at some point, although it would be difficult at the moment. But it is cats, those natural anarchists, that have stolen my heart. And what more can I say? In their everyday behaviour and attitudes, they maintain a lot more personal dignity than their noisy counterparts. Even when they do something abysmally stupid, fall off a chair in their sleep or shamelessly rub against you, their expression is always haughty. If you get the impression that I am somewhat projecting my own emotions on to them and that I sometimes even anthropomorphize them, you are right. That is what I do – and I’m not remotely ashamed of it.

The basic difference between dogs and cats is rooted in their evolutionary past. Wolves, the forebears of dogs (technically speaking, it is still the same species), are pack animals who have to cooperate during hunting, because one wolf to one deer is slightly too little. That is why, for a dog, hierarchy is a completely natural thing, along with commands and general discipline. Without this, a dog is lost and not very happy. We’re not talking of course about harsh training, rather a form of loving cooperation; as wolves display, where they all support each other, but each knows its place. Wildcats, the wild version of our fluffy friends, just like feral cats, don’t have to cooperate with anyone because only one cat is required to catch one mouse or (sadly) one bird. Thus although they are well aware of the concept of hierarchy, it causes the following response instead: “I know you are larger and stronger, so I won’t mess with you.” The idea of obedience is completely alien to cats. Of course, thanks to their intelligence, they can connect facts and understand, for example, that some sort of reaction of theirs causes us to be even nicer than normal. However, discipline, authority or submission are completely abstract for them. It’s not that the cat doesn’t give a damn about our instructions. He genuinely and honestly has no idea what we’re on about. Although, even if he did know what we meant, he would probably still not give a damn, but that’s another story. 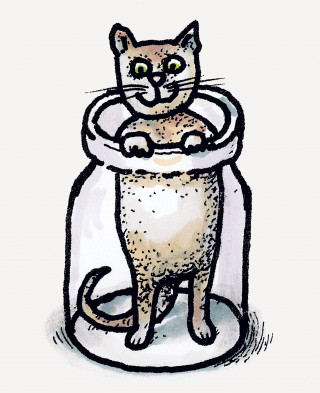 Magazine / society
The earliest cats first appeared around 30 million years ago, and their domesticated species are as popular as ever today. We present a randomly-chosen selection of cats that have changed history – at least for some people. Katarzyna Sroczyńska
Czytaj
Ludwika
Włodek 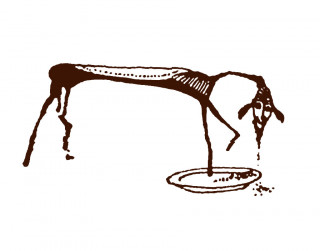 Reading / society
Dogs are more than man’s best friend – they teach us something about each other, too. One of our authors laments a loss in this article from the 1960 edition of “Przekrój”. Jan Stoberski

It is commonly thought that cats were domesticated by the Egyptians some 5000 years ago, but genetic and archaeological research has proven that it occurred at least 8000 or even 10,000 years ago in the region of the Fertile Crescent – the crescent-shaped strip of fertile land that runs from northern Egypt through the neck of the Arabian Peninsula and Asia Minor, as far as Iran. This is where the Neolithic revolution took place and the first civilizations in our part of the world were founded. When Mesopotamian farmers started to store their harvested grain in warehouses, the local rodents proclaimed a festival of plenty and maybe even attained some level of religious ecstasy. But very quickly the local wildcats – the Nubian or African wildcats – heard about it and decided to move in on those warehouses. Our European wildcats would never have done such a thing, because they are too shy and avoid people too much, which you can’t blame them for. However, the wildcat Felis silvestris is a species with an enormous geographical range, from Europe through North Africa to China. Various systematics divided it into a vast number of subspecies, and it just so happened that the Nubian version didn’t mind human contact. That’s why it domesticated itself (and people were obviously happy that someone was eating those voracious rodents for them).

When people selected predators to eat the rodents, they domesticated ferrets (or polecats), mongooses and dogs, which are easier to train. But cats took for themselves the evolutionary decision to live with us, and people could not resist their charms. According to an article published in 2017 in the prestigious scientific journal Nature, genetic analysis shows that within a couple of thousand years, the Egyptian population of this same subspecies, by chance showing even greater sociability, completed the conquest of our hearts and entered our homes. The rest is history. From the Middle East, cats were taken all over the world, and they are now the most numerous house pet on the planet. Therefore, although practically everywhere we find various small species or subspecies of cats, all house cats come from the Fertile Crescent. (Large cats are also common, but there were less of them given the obvious risk of domesticating something that could perhaps eat us). In fact, there is evidence that in China, the local leopard cat was also domesticated – it wasn’t very big and in some languages is even called a kitten; it has a different scientific name than the cat or wildcat. But it has no descendants among the current population of domesticated cats living there, and Chinese domestic cats also come from the Middle East.

Moreover, other than its total practical uselessness, the domestic cat (Felis silvestris catus) stands out from other domesticated animals because it hasn’t changed in the way it interacts with people. Its genetic makeup is still incredibly similar to that of its wild forebears. As Claudio Ottoni, lead author of the aforementioned Nature article claims, there was no need to change their design because they were already perfect. In reality, whenever I look at a cat, I think that in creating it, Darwin was at the pinnacle of his creative powers and should receive a Nobel prize for the cat. The cat is the ideal combination of grace and cuddliness with the most effective killing machine in nature. Among its unusual features is the fact that it was never just a predator, but also the potential victim of larger hunters. This explains its obsession with cardboard boxes, stalking, sudden jumps, and wanting to be as high up as possible. It is not surprising, therefore, that our ancestors were drawn to them. Recent research has shown furthermore that cats started to meow even as adults in order to simplify their own domestication. Wild kittens also meow but, when they grow up, they communicate with each other chiefly through body movements and a range of other sounds – it is only adult domestic cats that meow and only when interacting with humans. They cheekily take advantage of the fact that meowing has a similar acoustic frequency to the crying of a human infant. This, together with the purring that cats do when they want attention and when they are happy and which we are powerless to resist, meant that we were completely defenceless against the cat invasion. (Other research shows that the frequency of cat purring helps wounds to heal faster and illnesses easier to treat, not only in cats, but also for us.)

Cat breeds started to vary relatively recently, at the close of the Middle Ages. Unlike dogs, the variation among cat breeds is rather limited and is chiefly expressed in the patterns on their fur or lack thereof. All cat skeletons are essentially the same, although they differ somewhat in size, but you can’t begin to compare this to the variation found in dogs – from Miniature Pinscher or Pug on the one hand, to the Irish Wolfhound on the other. By the way, looking at the Miniature Pinscher, Basset hound, Yorkie or Pug, I have the impression that we ought to be hauled up in front of some universal court for what we have done to the wolf, one of the most majestic creations of evolution.

Cats haven’t changed very much, because they didn’t need to. They kindly decided to share with us the evolutionary perfection they were granted. I could continue this paean to cats (obviously without any emotional motivation, since I am of course a professional biologist), but I can’t. My two furry queens are demanding attention.

Magazine / society
The earliest cats first appeared around 30 million years ago, and their domesticated species are as popular as ever today. We present a randomly-chosen selection of cats that have changed history – at least for some people. Katarzyna Sroczyńska
Czytaj
Ludwika
Włodek

Reading / society
Dogs are more than man’s best friend – they teach us something about each other, too. One of our authors laments a loss in this article from the 1960 edition of “Przekrój”. Jan Stoberski
Czytaj 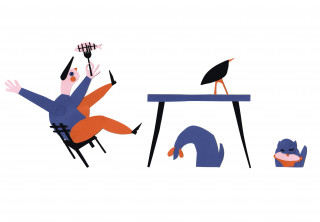 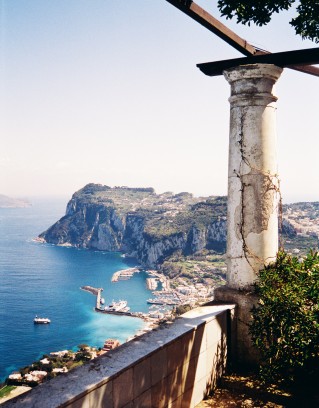 The Face of the Sphinx
The Enigmatic Life of Axel Munthe

Magazine / society
The medical doctor Axel Munthe led a quiet yet fascinating life, during which he built a villa on the Isle of Capri and lived alongside the Swedish royal family. He was also an avowed animal lover. Renata Lis
Czytaj 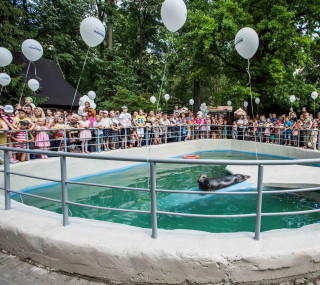 Magazine / science
Squids and octopuses are intelligent creatures with an unearthly beauty, as illustrated perfectly by the paintings of Ernst Haeckel. Mikołaj Golachowski
Newsletter