Go mushroom hunting! We encourage all to go to the forest (not only vegetarians and ancient Slavic culture aficionados). First take a healthy walk; later cook and taste. It’s pure magic.

Among the people fascinated by mushrooms was John Cage, the avant-garde 20th century artist, composer and performer. He spent a lot of time in forests methodically studying and collecting various mushrooms. In 1962, he co-founded a New York mycological society, and lectured on mushrooms (as well as experimental music) in the New School for Social Research. He even made some extra money supplying local restaurants with particularly fine specimens.

Mushrooms are strange creatures. They’re like a kind of meat, owing to their similar chemical composition. But at the same time, they’re a sort of vegetable, as they contain carbohydrates (about 40%) and a lot of water (in fresh mushrooms, it’s about 90%). The mushroom-hunting season lasts from summer to late autumn. For centuries, mushrooms were called ‘poor people’s meat’, as they are a valuable source of protein and can be as nutritious as a pork chop. Ever since meat became more widely available, mushrooms (as well as beans) have become rather forgotten as a hearty, high-protein, all-year food.

There’s only one king

Their reputation for stodginess is due to the fact that mushrooms contain certain indigestible compounds. However, if you chop mushrooms up, your stomach will have an easier time dealing with them. The young ones are easier to digest than the old ones. Apart from the proteins, mushroom contain minerals – phosphorus, potassium, magnesium, calcium and iron are about 8% of their dry mass, depending on the soil in which they’ve been growing. Not to mention vitamins B1, B2, B3 and, in the case of champignon mushrooms, golden chanterelles and porcini, also vitamins C and A.

Reading / society
The concept of ethical consumption is often difficult to grasp. A plant-based blogger explores how we can recycle in the kitchen and reduce food waste. Marta Dymek

Nonetheless, the mushroom’s greatest assets are its taste and aroma, which get more intense when dried. In Poland, mainly porcini, golden chanterelles, champignon mushrooms, saffron milk caps, slippery jacks, honey fungi and red-capped scaber stalks are picked. The hunting season lasts from August to October, though even after the first ground frosts, you can still find some honey fungi.

The fungi king is the porcino, that much is obvious. Finding one is always a source of pride for any mushroom picker. It is hard and meaty, with a dark brown sticky cap, 6-30 centimetres in diameter (in other words, something between a saucer and a plate). The flesh is always white; the taste is gentle and nutty. Young porcini may be cut into very thin slices and eaten raw in a salad. They are excellent when cooked and make very good stuffing for pierogi if you chop them into really small pieces. As the saying goes, one porcino is enough for the borscht.

With nuts or pickled

In traditional Slavic cuisine, forest produce – berries, raspberries, currants and mushrooms – served as an important element. Foraging played a huge part in the culture, as Hanna and Paweł Lis point out in their book Kuchnia Słowian, czyli o poszukiwaniu dawnych smaków [Slavic Cuisine: A Hunt for Ancient Flavours] (the authors are experimental archaeologists based in Grodzisko Żmijowiska, where an early Middle Age settlement has been reconstructed, old soups are concocted, and flatbread is baked on hot stones). Naturally, mushrooms became a staple of various regional cuisines. We find them in pierogi, uszka or bigos. In Masuria, you bake porcini with grated cheese mixed with grinded nuts, breadcrumbs and butter. One of the main traditional dishes of Kashubia is mushroom soup with potatoes. In Masovia, there are cutlets made of dried mushrooms, and also parasol mushrooms stuffed with other fungi (slippery jacks, red-capped scaber stalks, or boring brown boletes). Then there’s the Podlasie and Lublin regions, where saffron milk caps are pickled. And Podhale, where you stuff slippery jacks with bryndza (traditional sheep milk cheese).

You can also preserve saffron milk caps by salting them and keeping them in fat. After salting, you wash them, dry them, gently sprinkle with flour, and fry. Then you put them into stoneware dishes filled with clarified butter – they will last until winter. Some fungi species lose their quality when preserved. Others, say for example horn of plenty, aren’t particularly tasty when fresh, but get better if you dry them. Among good-for-drying species are: porcini, boring brown bolete and shiitake. After soaking, they greatly enrich sauces, soups and other dishes. The popular parasol mushroom can be blended into dust, which will then last you for a few months.

Fresh mushrooms are not easily transportable and cannot be stored when raw. Upon purchasing them, it’s wise to ask for a certificate from the health department (because some fairy-tale-like specimens can put you into everlasting sleep).

Edible mushrooms of the world

Shiitake – or ‘sawtooth oak mushrooms’, known in China for over 2000 years as ‘tongu’, valued for their taste and even more so for their medicinal value. They are believed to lower cholesterol levels and prevent arteriosclerosis. Usually marinated or dried.

Mun – dried, crinkle-cut mushrooms in characteristic grey-black, used widely in Chinese cuisine, especially for vegetarian dishes. Sometimes known as ‘wood ears’, because they grow on rotting trees. After soaking, they grow in volume to several times their original size and become similar to seaweed. Their taste is delicate, their consistency thick and crunchy. And they go especially well with hot spices.

Enokitake – cultivated type of Flammulina velutipes, also known as ‘golden needle mushrooms’ (the Polish name, płomiennica zimowa, was chosen in 1987 by Władysław Wojewoda, a botanist who established a huge collection of fungi in the Institute of Botany of the Jagiellonian University in Kraków, with 53,000 specimens). They are small and crunchy, with long stems and tiny white caps (the white results from cultivating them without lights and in the presence of carbon dioxide). They don’t require long cooking and can be fried or added into soups, as well as eaten raw.

Portabello – new variety of champignon mushroom from America. The cap measures over 10 centimetres in diameter. It is best fresh, good for stuffing (for example, with goat’s cheese and honey) or grilling.

Horn of plenty – wild mushroom, looks a bit like a golden chanterelle in mourning. They are dark grey or black, with a fennel-like cap with ridged, rolled-up edges. You can use them instead of truffles, or in hot dishes, salads, risottos and pastas.

Pioppino – or ‘poplar mushroom’. Italian fungi with a distinct, flowery smell. They grow in bunches, the caps are usually from 3-9 centimetres in diameter. The colour is dark-brown in the middle and light-brown on the edges. The flesh is meaty and thick. The pioppino’s taste has a hint of sweetness, they are excellent for salads. 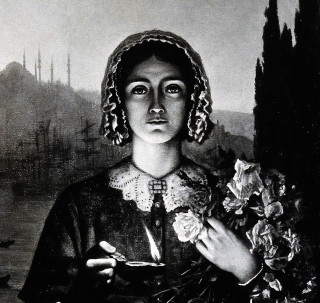 Sister Florence Turns On the Light
The Life of Florence Nightingale

Magazine / culture
Florence Nightingale was the pre-eminent pioneer of nursing. Her biography is equally remarkable, as a professional woman in Victorian Britain. Paulina Wilk
Zobacz 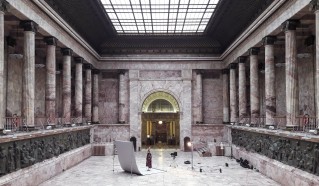 Media / Photo
For the last two years, Bownik has been documenting clothes that are part of museum exhibitions. Using the convention of museum photography – a grey background, neutral light – he incorporates his images into the sphere of objective record. However, the pictures do not fit into well-known historical narratives. The gesture of turning the clothes inside-out symbolically invokes the possibility of a different reading.
Czytaj 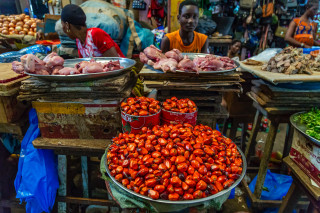 Food Imperialism Is Alive in Africa

Magazine / society
On the continent of Africa, the colonial economic arrangements never really ended. To discover this, you need look no further than the food on your plates. Waithera Sebatindira
Newsletter