Russia launched a full-scale invasion of Ukraine, causing a major escalation in the war that started between the two countries in 2014.

Representatives from 175 countries gathered in Nairobi, Kenya. Together, they pledged to develop by 2024 an internationally-binding legal agreement whose objective is to definitively end plastic pollution.

In the depths of the Antarctic Weddell Sea, nearly two miles below sea level, a team of researchers found the wreck of Endurance—the ship used during Ernest Shackleton’s expedition to the continent. Even though 107 years have passed, the barquentine is impeccably preserved; the name on the stern is still legible.

The number of discovered and confirmed exoplanets has reached beyond five thousand. As for the undiscovered ones, their number in the Milky Way is estimated at one trillion, while the number of galaxies in the universe is several hundred billion. It seems there is still a lot to discover.

Iga Świątek and her racket climbed to the top of the Women’s Tennis Association (WTA) rankings—and stayed there.

In Poland, Poznań’s Adam Mickiewicz University announced that, as part of a research study, a basic income (1,300 złotys [around $300] per month, for every adult) would be introduced in selected municipalities near the border with Kaliningrad Oblast in the northeast of the country. The experiment is planned for two years, but its start date is still unknown.

The first photo of the black hole at the center of the Milky Way was taken. The image was created thanks to a network of radio telescopes, so it cannot really be called a photograph. Even so, it is clear that the hole is very black indeed.

The Albanian government pledged that the last large wild river in Europe, the Vjosa, will remain protected from destructive human activity. The river and its surrounding areas will be turned into a national park.

The Canadian-Danish battle over Hans Island finally ended. The dispute had lasted since 1971; in 1984, Canadian soldiers planted their country’s flag on the island along with a bottle of local whisky, leading to a Danish government official removing both items and replacing them with a Danish flag and a bottle of schnapps. This process of exchanging flags and liquor continued across the years, which is why the conflict was known as the “Whisky War.” Agreeing on a plan for the island’s division officially put an end to the conflict. A pity, perhaps, since it was a beautiful example of how one might wage “war.”

The Prussian Cultural Heritage Foundation—a state body in charge of the most important museums in Berlin—announced that artifacts taken from African countries during German colonial rule will be returned. Talks concerning the matter have already begun with Namibia, Tanzania, and Cameroon.

A report published by the journal Nature Food suggested that the transportation of fruit and vegetables generates twice as much carbon dioxide as their production (because of, among other reasons, cold storage causing high emissions). A plant diet remains more ecological than eating meat, yet it would be best to consume locally-sourced food. 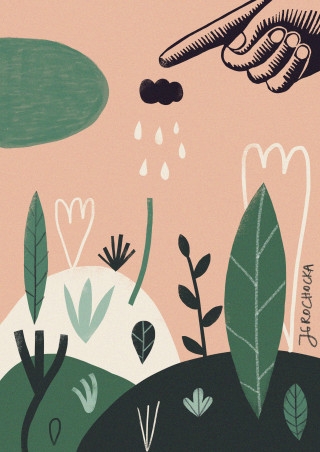 How Arne Sowed the Seed
The Father of Deep Ecology

Magazine / society
Almost half a century ago, the Norwegian philosopher Arne Næss created the concept of deep ecology. We still have much to learn from his principles today. Andrzej Kula
Czytaj
Julia
Fiedorczuk 1313 Was a Strange Year…
The World Before European Colonization

Magazine / society
The global 14th-century map would be unrecognizable to the eyes of today. Empires and states were thriving in Africa and Asia, while the so-called “Old Continent” was of much lesser significance. Adam Węgłowski
Czytaj

Magazine / society
Microplastics are almost imperceptible to the human eye. Yet their impact on the environment is shocking – as evidenced by the Great Pacific Garbage Patch. Piotr Żelazny

After a two-year transitional period, the Landscape Act—which aims to reduce the scope and number of outdoor advertisements in public spaces—came into force in Kraków, ending its “advert hell.” Many more cities could follow this example.

The world’s first sand battery was launched in the Finnish town of Kankaanpää. Energy from low-cost, renewable sources is stored as heat in an insulated tank filled with one hundred tons of sand that heats up to 932℉. A wonderfully simple idea—in winter we will know how effective it is.

The Czech police got a new patrol car: the Ferrari 458, seized from criminals. It will be used to crack down on the illegal road races that plague the country. After being repainted and modified, it can be safely said that the new recruit has left its dark past behind and is ready to serve and protect.

The poor, poor Oder! In the Central European river poisoned by humans, all life is dying en masse.

A corneal implant made from pig skin can restore sight, scientists at Linköping University in Sweden announced. They published their findings based on the first twenty patients who participated in a pilot clinical study and received the implant. This new method could help more than twelve million people worldwide.

Spanish scientists announced that they’d solved the mystery of the immortal jellyfish, Turritopsis dohrnii (known for the ability to reverse its life cycle and rejuvenate itself). The answer is  written in its genes. Still, its daily sea baths and addiction-free lifestyle surely make a contribution, too.

The Spanish government introduced, at least until the end of 2022, free train rides (on commuter services and medium-distance routes under 185 miles), as well as a 30 percent price cut on urban public transport tickets across the country. The move is to help locals tackle the rising costs of living.

Haarlem in the Netherlands will be the first city in the world to ban adverts for meat from public spaces (the ban also covers adverts for holiday flights, fossil fuels, and cars that run on fossil fuels). The motivation behind the change is a concern for the climate.

“Earth is now our only shareholder,” declared Yvon Chouinard, owner of the clothing brand Patagonia. Chouinard transferred ownership of his company to a non-profit organization fighting climate change.

After three years of planning and two weeks of walking, Brazilian and British scientists managed to reach the tallest tree in the Amazon rainforest. The tree, which was spotted on satellite images in 2019, is from the species Dinizia excelsa and has a height of 290 feet.

Composting as a method of human burial was legalized in California. The deceased is placed in a metal box filled with alfalfa, straw, and sawdust, after which a steady supply of oxygen is provided to stimulate microbial growth. Within a month, the body is transformed into life-giving soil suitable for use, for instance, in the garden.

Scientists at the US Rockefeller University finally established why some humans are more attractive to mosquitoes and others less so—it depends on the levels of carboxylic acid in the skin. The team also ruled that no soap can take care of the problem.

In an election watched by the whole world, Lula da Silva—who formerly served two terms between 2003 and 2010—became Brazil’s president once again. Thus Jair Bolsonaro—known for his dislike of trees, minorities, and women’s rights—lost power.

The global population reached eight billion. The team at Przekrój wish everyone happiness!

How Arne Sowed the Seed
The Father of Deep Ecology

Magazine / society
Almost half a century ago, the Norwegian philosopher Arne Næss created the concept of deep ecology. We still have much to learn from his principles today. Andrzej Kula
Czytaj
Julia
Fiedorczuk

1313 Was a Strange Year…
The World Before European Colonization

Magazine / society
The global 14th-century map would be unrecognizable to the eyes of today. Empires and states were thriving in Africa and Asia, while the so-called “Old Continent” was of much lesser significance. Adam Węgłowski
Czytaj Reading / literature
“in a former life / I crammed ripe blueberries into my mouth.” A poem by a contemporary Polish poet. Ida Dzik
Czytaj The Chemistry of Blue
How Plants and Animals Produce the Color

Magazine / society
It may feel like a ubiquitous presence in the sky and sea, yet the cerulean shade is surprisingly rare—and difficult to produce—among living organisms. Szymon Drobniak
Czytaj

Magazine / society
Educational neuroscientist Marzena Żylińska talks about the lessons the school system should be learning – such as moving away from a culture of testing and correcting. Berenika Steinberg
Newsletter