It was 8.17pm GMT when the unassuming, almost shoddy landing module of the Blue Planet’s travellers appeared on the surface of the moon. Several hours later, the proud representative of the Homo sapiens species emerged: it was the American Neil Armstrong. “That’s one small step for a man, one giant leap for mankind,” he said when his foot touched the moon for the first time in history.

It was a Sunday night, but humans watching the landing on their television sets hardly thought about the duties awaiting them in the upcoming week. This was also true for the citizens of the Polish People’s Republic, busy with preparations for the grand celebration of the National Day of the Rebirth of Poland, also known simply as ‘22nd July’. The space oddity happening on the TV was, therefore, a worthy culmination of the passing weekend and a suitable introduction to the upcoming holiday. At least to the four million households who had a television set, and perhaps those whose screen-owning friends were willing to have them over for the lunar broadcast. In the 1870s, the pioneering Polish precursor of television, Julian Ochorowicz, predicted the invention of a “telegraphic device for seeing things from a great distance”. He called those hypothetical inventions telephotone and telephotoscope, but even in his boldest dreams, he probably never imagined that such a feat of technology would come true.

To this day, the Polish public service broadcaster (TVP) still boasts about the ratings from the historical 1969 moon landing broadcast. “It is estimated that over 600 million viewers from all over the globe watched the event as it happened on their television screens. Citizens of Poland were the only viewers from the Communist Bloc to join the rest of the world at that moment,” reads the note on TVP’s website.

What is more, the decision to allow the broadcast was supposedly made at the highest level, and officials in Warsaw had to deal with Moscow’s displeasure afterwards.

“The decision to go ahead with the broadcast was made personally by the First Secretary of the Polish United Workers’ Party Władysław Gomułka, who was then told off by Leonid Brezhnev himself. Brezhnev visited Warsaw to attend the celebrations of the anniversary of establishing the Polish People’s Republic. Supposedly because of the approaching holiday, Gomułka wanted to enrich the television programme and take this opportunity to show that there is no God in space. Instead, he showed the US overtaking the USSR in the Space Race.”

Was this how Polish viewers interpreted the whole event? It’s likely that many had similar thoughts on the matter, but the common response was the feeling of something extraordinary happening. Sometimes, disbelief crept in. “Cheats!” “Scammers!” “Porky pie!” – such exclamations echoed in many a household. The people watching the event on their primitive (and yet, expensive and hard to come by) black-and-white television screens made by Wisła or Belweder struggled to believe that this magnificent “leap for mankind” had really taken place. Then again, the Russians managed to get Sputnik into orbit and send the first man into space, so why not the Americans? Still, many of those watching grew up in times when even the sight of a radio or a car was a shock. No wonder they couldn’t wrap their minds around the idea that such an extraordinary revolution in travel and communication took place in their lifetime.

Today, we would expect the crowd of sceptics to shrink and scatter, but it grew in numbers instead! At its core are those who believe that the whole 1969 moon landing event was fake and filmed in a secret American set location, carefully arranged by an experienced director – such as Stanley Kubrick, who just one year later gained fame with his sci-fi picture 2001: A Space Odyssey.

Are there any clues to prove the conspiracy? For example, there are no stars visible on any photographs taken on the moon! Moreover, the recording shows the American flag flapping in the wind, even though there should be no wind there… The list of accusations goes on. Time after time, scientists addressed such issues patiently, dismissing the conspiracy theorists’ arguments. It didn’t help much though, as the idea still attracts many sworn followers who refuse to believe that the Americans have visited the moon several more times since, and that they even left their moon buggies there, formally known as Lunar Roving Vehicles. Interestingly, the rovers were constructed by the Polish immigrant Mieczysław Bekker, an engineer and Warsaw University of Technology graduate who stayed in the US after World War II and never came back to his homeland. The conspiracy theory followers aren’t even bothered by the fact that the 1969 moon landing was not challenged by the Soviets, the American’s main rivals. Newspapers behind the Iron Curtain reported extensively on the preparations for the Apollo 11 mission, as well as on its course and ultimate success. In Poland, they wrote: “Human footprint left on the moon”, “Armstrong and Aldrin become the first lunarnauts”, “The first human expedition to the moon was successful”, and so on. Of course, the papers also made sure to remind readers of the upcoming 22nd July celebrations and of the first woman astronaut Valentina Tereshkova’s visit to Warsaw (surely, the timing of said visit aligning with the Apollo 11 mission was pure coincidence). However, the Americans’ achievement was never questioned.

Several small mysteries still surround the moon landing broadcast on Polish television from 50 years ago. People ask online: What happened to the original material shown by TVP back in 1969? Did it perish in the archives, or perhaps it’s still collecting dust on some shelf? Did anyone film the TV broadcast with an amateur movie camera? There were no VHS recorders available in Poland back then, after all.

Some people also dispute the claim that the Poles were the only members of the Communist Bloc allowed to watch the historic event. As it turns out, the broadcast was also transmitted on the public Czechoslovak Television (ČST), although unannounced and supposedly illegal, even. Some say the signal was pirated by the local station of the national television and broadcast without reporting to Big Brother in Moscow. The memory of Soviet intervention in Czechoslovakia in 1968 was still fresh, and the citizens were delighted to see the Americans land on the moon before the Russians.

Those doubts are best left to real enthusiasts of the topic. Billions of us ask other questions today. Will we ever come back to the moon, and when? Is it really something worth investing in while the Earth is dying before our eyes? Or maybe, as some insist, that’s the very reason why we should set our sights on space? 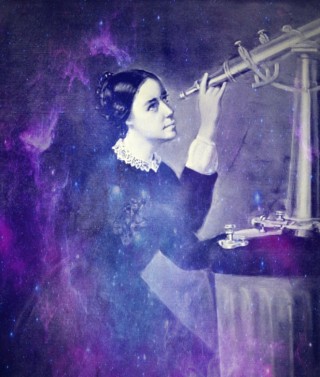 Reaching Out to the Stars
The Life of Maria Mitchell

Reading / science
In 1847, Maria Mitchell became the first American woman astronomer to discover a comet. Alongside her love for the stars, she was a passionate campaigner for gender equality in the sciences. Julia Fiedorczuk
Czytaj