In the Valdemar Questionnaire, we give voice to translators who reflect on their work and role as intermediaries between languages and cultures. In this instalment of our series, Valdemar takes on Miroslaw Lipinski, the much-dedicated translator of Stefan Grabiński, a classic author of Polish horror.

You can read Lipinski’s translation of “The Sloven” here.

Reading / literature
Antonia Lloyd-Jones speaks with Valdemar about grisly murders, the elegance of Polish, and the lanky ghost of Józef Czapski. Ernest Valdemar

Do you remember your first encounter with Stefan Grabiński?

It was decades ago. Franz Rottensteiner’s book (The Fantasy Book) was on sale at one of the local chain bookstores in New York. I was looking through the stacks when I should have been doing messenger delivery work. So, right there in that bookstore, I discovered that there was a Polish author named Stefan Grabiński. Before Rottensteiner’s book, I knew nothing about Grabiński.

Did Grabiński have an impact on your life? (Valdemar wants to know)

Yes! I recognized a kindred soul. After I read about Grabiński in that Rottensteiner book, the first story I read in the Slavic Division of New York’s main library was “The Glance”. It was about feelings of panic, which I had a lot of at the time, and it was also wickedly humorous. After that, I was a fan. I felt that here was a literary friend whom I could understand very well. Subsequent readings of other Grabiński stories confirmed this impression.

In “The Sloven”, we learn that the character of the train conductor couldn’t stand ordinary passengers: “For him the railway existed for the railway, not for travelers.” What’s your vision of ideal travel?

I love trains and consider them perfect means of travel. Not too fast, mind you, so you can see what you are passing. Also, when I was in Poland when I was about 16, I took a local train to or from Wolsztyn that seemed like from ages ago. The inside looked like something Sherlock Holmes would use. Very Victorian. I’m sure that train is not around anymore.

Do you believe in ghosts, spirits, apparitions? (Valdemar wants to know)

Sorry, no. In this, I am different than Grabiński.

What is the most difficult thing about translating Grabiński into English?

Making sure all the words and expressions are well translated. I know Polish from living in a Polish home, but I was not raised in Poland, so that my written Polish is negligible. Luckily, I write English for a living, and even have a degree in that, so that translating is not too difficult.

His humorous misanthropy. Some of Grabiński’s stores are wickedly humorous.

How would you describe the ideal feeling that his stories evoke in you as a reader?

A disdain for ‘normality’, a look at perceptions and experiences that might not be considered average.

What would be the ideal material circumstances of reading “The Sloven”?

Initially, one would say aboard a train! The older, the better. But for me, the ideal circumstance is something I experienced in Wolsztyn many decades ago. Night-time in a creepy house in a village, alone in a large room, most of the lights off. Shadows around, and every sound suspicious.

What part of your job as a translator do you like most?

Finding and reading something new, which then begs to be translated.

Some words and expressions are hard, even for a native Polish speaker. Luckily, there is now the internet, but before it used to be massive dictionary volumes in Polish. The Slavic Division [at New York Public Library] was very important for this. Recently, I was also lucky to contact Slawek Wielhorski, who lives in Poland and is an admirer of this kind of fiction. So his perception is valuable.  At other times, after spending a while on a word or expression, a guess is warranted. After all, Grabiński is not around to ask a question. But these difficulties are a challenge, something to be solved. There is nothing about translating Grabiński that I hate.

Getting ‘the feel’ correct and not just the words. Sometimes, one changes a word if the meaning is the same, but another word or expression is closer to what the translator’s gut feeling is of what the author intended. Sometimes I will use a particular word, but a different word the next time, though the original Polish word doesn’t change. It seems I spend more time on a translation than the writing of the story by the author.

Yes. I don’t want to get too mystical, but I feel Grabiński speaks to me sometimes. Not a lot, but just basically approves this or that. I am very aware of what the reality is, but in these moments, I don’t care.

It should be as much as the original but readable for the English speaker. Some of the excessive Slavic wordage, of the conjunction i [‘and’] for instance, have to be dealt with somehow if they get too much for an English reader.

I cannot say no, but I am sure there are texts that are very hard to translate, if not impossible.

Working on a translation a few hours a day and getting paid good money, which happens rarely. The rest of the time is spent enjoying life. And life is anything you want it to be.

That I am reading the original author. A translation just provides the chance.

Who is your favourite Grabiński character? And why?

Wrześmian, the protagonist of “The Area”. Not just this story, but its addition in a chapter of Baphomet’s Shadow. I like Grabiński’s artistic statement and that Wrześmian is willing to fight for it. Of course, Wrześmian is Grabiński.

Probably Tarzan. He was an English lord and strong, both physically and mentally, but also he liked to dispense with the formality and constraints of society. Of course, the Tarzan novels have little humor, and that is a failing to me. So I will add Lex Barker, who played Tarzan, amongst other characters. Barker always seemed to have a twinkle in his eyes and a smile hovering around the corners of his mouth. 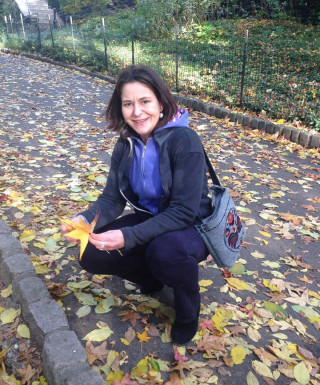 I Am Just the Monkey, Not the Organ Grinder
Antonia Lloyd-Jones on Olga Tokarczuk’s Nobel Prize

Reading / culture
“I am just the monkey, not the organ grinder. And I am one of very many monkeys, and a very small one at that,” says Antonia Lloyd-Jones (who has translated three novels by Olga Tokarczuk) when asked about the Nobel Prize in Literature 2018. Mikołaj Gliński
Czytaj