How to Feed a Dictator is the result of several years’ research by intrepid reporter Witold Szabłowski. After seeing a documentary about army cooks that featured a man who cooked for Tito, he decided to track down the chefs who worked for some of the world’s most feared dictators. He found five people, each with an extraordinary story to tell, about how they cooked for Saddam Hussein, Idi Amin, Enver Hoxha, Fidel Castro and Pol Pot. Needless to say, a professional post of this kind inevitably carries the risk of being accused of trying to kill your employer, so it is not a job for the faint-hearted. But the intimate view we get of the dictators through the kitchen door is remarkable and unforgettable. Along the way, we learn how to cook their favourite dishes, and also what sort of food their victims were obliged to eat. 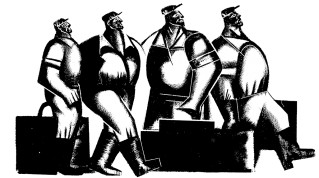 Reading / society
In Chechnya, the centuries-old Caucasian honour code is slowly being eroded by the bloody politics of Ramzan Kadyrov. Wojciech Jagielski
Czytaj 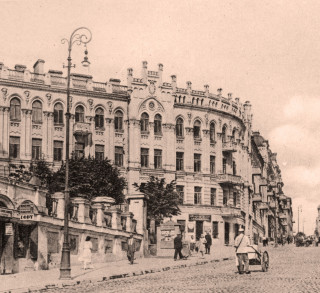 Magazine / society
Nothing seems real in the landscape of Bełchatów and its surrounding villages. It's little surprise – after all, this part of civilization has been sacrificed at the altar of lignite extraction. Filip Springer

One day, President Saddam Hussein invited some friends onto his boat. He took along several bodyguards, his secretary, and me, his personal chef, and we set off on a cruise down the river Tigris. It was warm—it was one of the first spring evenings that year. At the time we weren’t at war with anyone, everyone was in a good mood, and Salim, one of the bodyguards, said to me, “Abu Ali, sit down, you’ve got the day off today. The president says he’s going to cook for everyone. He’s going to make koftas for us.”

“A day off . . .” I smiled, because I knew that in Saddam’s service there were no such words. And because there were going to be koftas, I started getting everything ready for the barbecue. I minced some beef and lamb and mixed them with tomato, onion, and parsley, then put it in the fridge so that it would stick to the skewers well later on. I prepared a bowl for washing one’s hands, lit the fire, baked some pita bread, and made a tomato and cucumber salad. Only then did I sit down.

In Iraq every man thinks he knows how to barbecue meat. He’s going to do it even if he doesn’t know how. And it was the same with Saddam: people often ate the things he cooked out of politeness; after all, you’re not going to tell the president you don’t like the food he has made.

I didn’t like it when he got down to cooking. But that time I thought to myself, “It’s almost impossible to ruin koftas.” If you have the meat ready, you squash it flat onto the skewer, press it with your fingers, then place it on the fire for a few minutes, and it’s done.

The boat set off. Saddam and his friends opened a bottle of whisky, and Salim came into the kitchen for the meat and salad.

I sat and waited to see what would happen next.

Half an hour later, Salim came back carrying a plate of koftas. “The president made some for you too,” he said. I thanked him and said it was very good of the president, broke off a bit of meat, and wrapped it in pita bread. I tried it and . . . felt as if I’d burst into flames!

I threw a glass of water down my throat, but it didn’t help.

It was no good. I was still on fire. My cheeks and jaw were burning, and there were tears pouring from my eyes.

I was terrified. “Poison?” I thought. “But why? What for? Or maybe someone was trying to poison Saddam, and I’ve eaten it?”

Am I still alive?

But in that case, what was he playing at?

It took me a good quarter of an hour to wash down the spicy flavor.

That was my first encounter with Tabasco sauce.

Saddam had been given it by someone as a gift, but because he didn’t like very spicy food, he decided to play a joke by trying it out on his friends. And on his staff. Everyone on the entire boat was running around pouring water down their throat, while Saddam sat and laughed.

Twenty minutes later, Salim came back to ask if I’d liked the food. I was furious, so I said, “If I’d spoiled the meat like that, Saddam would have kicked me in the butt and told me to pay for it.”

He did that sometimes. If he didn’t like the food, he’d make you give back the money. For the meat, the rice, or the fish. “This food is inedible,” he’d say. “You’ve got to pay fifty dinars.”

So that’s what I said, never expecting Salim to repeat it to the president. But when Saddam asked him how I’d reacted, Salim replied, “Abu Ali said that if he’d made something like that, you’d have kicked him in the butt and told him to pay for it.” That’s what he said, in front of all Saddam’s guests.

Saddam sent Salim back again to fetch me.

I was scared. In fact, I was terrified. I had no idea how Saddam was going to react. You did not criticize him. Nobody did that: not the ministers, nor the generals, let alone a cook.

So off I went, terrified, annoyed with Salim for repeating what I’d said and annoyed with myself for mouthing off so stupidly. Saddam and his friends were sitting at the table, on which were the koftas and some open whisky bottles. Some of the guests had red eyes; evidently, they’d eaten the Tabasco-flavored koftas too.

“I hear you didn’t like my koftas,” said Saddam in a very serious tone. His friends, the bodyguards, the secretary—everyone was looking at me.

I was getting more and more afraid. I couldn’t suddenly start praising the food; they’d know I was lying.

I started thinking about my family. Where’s my wife right now? What’s she doing? Are the children home from school yet? I had no idea what might happen. But I wasn’t expecting anything good.

And suddenly he started to laugh.

Saddam took out fifty dinars, handed them to Salim, and said, “You’re right, Abu Ali, it was too spicy. I’m giving back the money for the meat I wasted. I’ll cook you some more koftas, but without the sauce this time. Would you like that?”

So he cooked me some koftas without any Tabasco. This time they were very good, but I tell you, it’s impossible to ruin koftas.

Reading / society
In Chechnya, the centuries-old Caucasian honour code is slowly being eroded by the bloody politics of Ramzan Kadyrov. Wojciech Jagielski
Czytaj

Ten Feet Under
The Gold Rush in Peru’s Amazon Basin

Reading / society
The Madre de Dios region has seen a relentless stream of illegal gold mining. This is taking its toll not only on the Amazonian rainforest, but also on the area’s inhabitants. Paulina Wilk
Czytaj 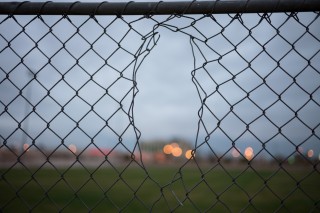 The Un-Prison
Life Inside Uruguay’s Most Progressive Prison

Reading / society
Punta de Rieles is home to around 600 prisoners, 38 small businesses and a thriving inmate community. It also has some of South America’s lowest recidivism rates. Maria Hawranek
Czytaj Sorrow and Pain, Torment and Martyrdom
The Latter Years of Tadeusz Peiper

Magazine / society
In the early 1920s, Taduesz Peiper was one of Poland’s leading avant-garde poets. 30 years later, he was ostracized by his peers as his mental health spiralled into decline. Mikołaj Gliński
Newsletter