For decades, a tiny patch of land in New York Harbour served as the first port of call for those Europeans who had made the long journey across the Atlantic Ocean, in search of the American Dream. Ellis Island – also known as ‘the gate to America’ – processed almost 12 million people through its immigration station. Many of them would have quickly found themselves at the island’s luggage room, where a Mr Peter Mac was responsible for the safe passage of their belongings.

The first immigrants to enter the huge building — with its countless windows, steep roof, and peaked towers, more resembling a seaside casino than an inspection station for the poor — feel the same thing under their feet that they have felt the last few weeks onboard their ships: solid wood. The timber came from North Carolina and Georgia; the floor is pine, seasoned, and the walls are made of green lumber — pine and spruce — so arrivals from villages and towns are greeted by the familiar scent of the forest and home. The Sheridan & Byrne company was supposed to mount stainless metal siding on the exterior walls, but it’s not known if they did so. In light of the events that will soon follow, it seems doubtful.

The building is 400 feet long and 150 feet wide. It is equipped with central steam heating, electricity, and modern bathrooms. Harper’s Weekly writes it can receive 10,000 immigrants a day. This later turns out to be an exaggeration. A day of 5,000 at Ellis Island feels like the wrath of God. But even so, the island is probably the largest caravanserai in the world.

Ever since he was named commissioner, Colonel Weber has been meticulously assembling the island’s staff. He began with a visit to Castle Garden. He arrived unannounced and mixed in with the crowd. He witnessed terrified people being shoved every which way by charlatans and con artists. He observed the immigration workers and spoke with a man who commanded his respect. Soon he had three lists. A good one, for honest workers; a neutral one, for workers whose moral qualifications he lacked enough information to assess; and a bad one, for workers who shouldn’t be trusted with tasks on Ellis Island.

For help in the first months of his job, Commissioner Weber brings in Charles Semsey and James O’Beirne, who share wartime connections with Weber. Major Semsey, a clerk at Castle Garden, served in the 45th New York Infantry Division and, like Weber, fought in Virginia. He is 13 years older than the colonel. His real first name is Kálmán.

He comes from an aristocratic Hungarian family and was born in Bártfa in the mountains of Hungary (today’s Bardejov in northeastern Slovakia), and his relatives include Andor von Semsey, a mineralogist and discoverer of a beautiful crystal called semseyite, samples of which in the 21st century fetch high prices at specialist auctions.

O’Beirne, born in Ireland and two years younger than Weber, also fought in Virginia. He advanced to the rank of general. He takes pride in having stood guard at President Lincoln’s deathbed and then helping track down his assassin, the actor John Wilkes Booth. After the Civil War, as a correspondent of the New York Herald (a mighty newspaper that sent Stanley to Africa in 1871 to find Livingstone), he reported on battles with Native Americans. O’Beirne is a daredevil and individualist, qualities that before long he’ll find hard to reconcile with the discipline of an immigration station.

Colonel Weber occupies an office in the corner of the second floor of the pine structure, which also houses a telegraph office, a currency exchange bureau, an information stand, a lunch buffet, and a railroad ticket office, while his deputy O’Beirne moves into a similar room at the opposite end. 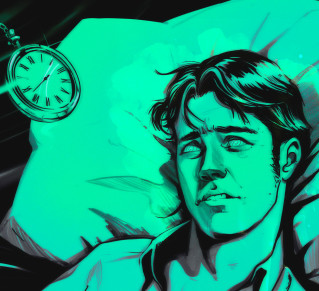 The Art of Translation with Sean Gasper Bye
The Valdemar Questionnaire

Reading / literature
Sean Gasper Bye speaks with Valdemar about the difficulties with Adam Mickiewicz, why sophistication is overrated, and his translation of Małgorzata Szejnert’s “Ellis Island: A People’s History”. Ernest Valdemar
Czytaj 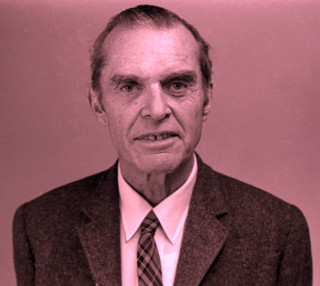 Reading / literature
In this extract from “The Birds They Sang”, Stanisław Łubieński explores the origins of James Bond’s name, which – surprisingly enough – was borrowed from an American ornithologist. Stanisław Łubieński
Czytaj 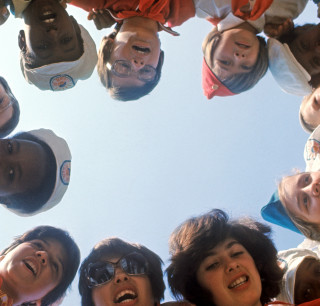 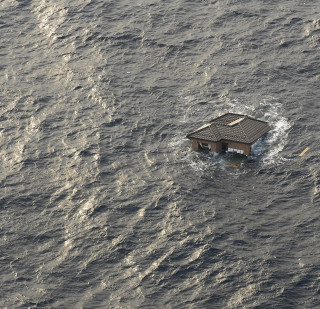 What Lies Under the Water?

Reading / literature
In this unpublished extract from Katarzyna Boni’s “Ganbare! Workshop of Dying”, we join two men in Onagawa, Miyagi Prefecture on the day the 2011 earthquake and tsunami struck the town. Katarzyna Boni

One of the workers on the Castle Garden “good” list is Peter McDonald, who has been handling luggage for 20 years. He can tell at a glance what country a bag is from. He knows more about their origins than his own.

When the new luggage room is opened, with space for 12,000 passengers’ worth of bundles, suitcases, and trunks, Peter Mac, as he’s known here, is 43. He knows his date of birth — 1849 — but he doesn’t know where he was born — in Ireland, New York, or Fall River, Massachusetts. Nor does he know if the people who raised him were his own parents or friends of theirs who took him on when his mother died. Luggage handler Peter Mac in his round work cap, white shirt, and pants with suspenders (the job is so good Peter has started to show a paunch) conducts the movements of possessions transported from every corner of the globe. Some of his observations are obvious, but now and then he gets a surprise. For instance, he’s used to every nation roping up its bundles differently — and he knows which loops and knots were tied in his beloved Ireland (where his wife is from), which in Sweden, which in Italy, and which in Switzerland.

Danes, Swedes, and Norwegians have the most tightly packed luggage. Peter thinks they bring the most out of any nationality — mattresses, featherbeds, bed frames, drawers, kitchen chairs — but try and explain to them they’ll pay a fortune to have it all delivered to their destination and they’d die rather than part with it. The suitcases of the English and French are in better condition than others’ and certainly are the most modern. Greeks and Arabs have bundles large as mountains, gathering up five or six hundred pounds’ worth of various objects, squeezing them all together, and wrapping them up in carpets and scarves. Sometimes it takes six men to lift an object like that.

As Peter stands guard over the suitcases and bundles, he maintains that, improbably, he’s never lost a thing. But he can’t get over how the Poles behave. They’re actually registered on their travel documents as Russian, Austrian, or German, but after so many years working at Castle Garden, Peter Mac can distinguish the sounds of different languages. Polish speakers don’t like putting their bags in storage and instead haul them everywhere they go. They attach the greatest importance to eiderdowns, often carrying them on their heads or shoulders, using one hand to prop them up while the other drags a trunk with children clinging on.

Another man carefully observing this deluge of people and possessions is Dr Victor Safford, who’s being offered the position of physician on Ellis Island. He ’s come in for an interview, but he still has some time, so he watches. He’s got a very sharp eye, and what he sees at Ellis Island so fascinates him he’s prepared to accept a large pay cut to get to know this remarkable place better. He’s looking forward to the professional challenge and has to admit he likes the immigration service medical uniform, which resembles that of a Navy officer.

Like Peter Mac, he’s also struck by the immigrants’ reluctance to part with their possessions and, as befits a surgeon, he notes the hazardous results. No problem if a wicker basket bashes into someone, because the wicker will give way and not break anyone ’s ribs. But collisions with boxes and chests clearly packed with metal objects are more severe. You also have to watch out for large bundles on the shoulders of strong Slavic girls. A bale like this,

“may feel superficially soft and fluffy, but besides a feather bed or two it is likely to contain a pair of andirons, iron pots or kettles, or various other Eastern European Lares and Penates of a substantial, practical character.”

If the girl turns around suddenly, anyone unlucky enough to be standing nearby will feel the momentum of her cargo as it swings around. Yet in Dr Safford’s opinion, nastiest of all are the tidy little boxes of the English, not only hard but also metal-cornered, so they cause injury.

Victor Safford has literary talent and imagination, seeing iron hidden in featherbeds and predicting the strength of a blow from bundles supposedly stuffed with down. Meanwhile, when the clerk Augustus Sherman observes the immigrants, he is most focused on what he sees on the surface. He’s only 27, but with his gray suit, tie, starched collar, and signet ring, he looks more like an old bachelor. He closely follows this improbable human hodgepodge of gestures, facial features, glances, attitudes, hairstyles, sidelocks, beards, hats, yarmulkes, turbans, headscarves, aprons, tunics, shoes, felt boots, and woven bast slippers. For the moment, Augustus, the well-educated son of a wealthy trader from Pennsylvania, is an ordinary staff clerk on Ellis Island.

Can he sense what the future holds? First he will become a senior clerk, then chief clerk, then confidential secretary to the island’s commissioner — yet it’s his photographs that will make him truly famous.

Translated from the Polish by Sean Gasper Bye

This is an excerpt from “Ellis Island: A People’s History” by Małgorzata Szejnert, published in the UK by Scribe Publications on 8th October 2020. Translated from the Polish by Sean Gasper Bye.

You can read our interview with Sean Gasper Bye here.

The Art of Translation with Sean Gasper Bye
The Valdemar Questionnaire

Reading / literature
Sean Gasper Bye speaks with Valdemar about the difficulties with Adam Mickiewicz, why sophistication is overrated, and his translation of Małgorzata Szejnert’s “Ellis Island: A People’s History”. Ernest Valdemar
Czytaj

Reading / literature
In this extract from “The Birds They Sang”, Stanisław Łubieński explores the origins of James Bond’s name, which – surprisingly enough – was borrowed from an American ornithologist. Stanisław Łubieński
Czytaj

What Lies Under the Water?

Reading / literature
In this unpublished extract from Katarzyna Boni’s “Ganbare! Workshop of Dying”, we join two men in Onagawa, Miyagi Prefecture on the day the 2011 earthquake and tsunami struck the town. Katarzyna Boni
Czytaj 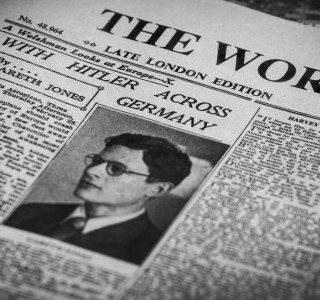 Tell Them That We Are Starving

Reading / literature
In this unpublished translation from Mirosław Wlekły’s “Gareth Jones: The Man Who Knew Too Much”, the journalist recounts his conservations with communists and peasants as he heads from Moscow to Soviet Ukraine. Mirosław Wlekły
Czytaj 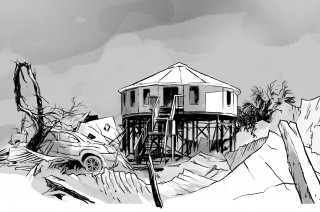 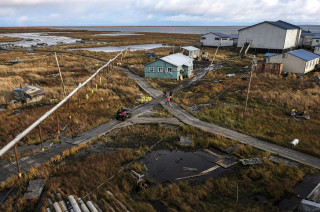 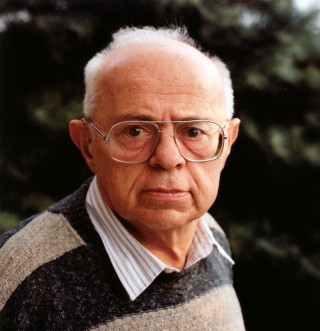 A Cold
On Lem, Philip K. Dick and the FBI

Reading / literature
In an extract from his book “Out of this World: The Life of Stanisław Lem”, Wojciech Orliński describes a sensational yet often misunderstood encounter between Stanisław Lem and Philip K. Dick, in which the latter denounced the former as a thief. Wojciech Orliński
Newsletter