On the 210th anniversary of the death of Rebbe Nachman of Breslov, our author Tomasz Wiśniewski pays tribute to the great tzadik and author of astonishing literary parables – by writing his own literary parable of similarly unsurpassed spiritual depth.

In a certain small town, which no longer exists, lived a certain fearful man. One time he noticed a strange light coming from the synagogue. He went closer, and in the doorway he saw two Hasids talking, discussing – he initially suspected – various misfortunes and disasters that they had managed to overcome using their mystical wisdom.

But the man couldn’t have been more wrong. The holy men were discreetly telling jokes to each other, and the light emanating from them was so bright because God enjoyed their humour. When the little man understood this, he shyly went up to them and told a few jokes, which he had heard from his cousin in Lublin. Then the light shone even brighter, and the local population commenced to gather to see the miracle of light. Whoever came near told another joke, and the ball of light grew and grew.

Suddenly a young rabbi appeared. When he told a joke about a fish that grew legs, the light transformed into flames that enveloped the synagogue.

The fearful little man woke up and realized it had been a dream. After some God-fearing reflection, he recognized that this dream taught a certain lesson: one must maintain moderation in everything. So he recited a prayer and went out into the street.

But he almost fainted when he noticed that light was emanating from the entrance to the synagogue; he understood that his dream had been prophetic. He ran up to the humorous Hasids and, quickly telling them his jokes, he started to ask about the young rabbi, to stop him from telling the joke about the fish that would cause the synagogue to burn. But he couldn’t find him – not anywhere near the synagogue, nor anywhere in the town.

His fear of fire was so great that he set out into the world to find the rabbi and convince him to forever give up telling the joke about the two-legged fish.

Fear of the burning synagogue marked the man’s entire life, and it degenerated into a fruitless and humiliating journey. Though with the passing of the years he even forgot what the rabbi’s face looked like, till the day he died he never stopped looking for him. He never returned to his hometown, and the town itself ceased to exist; supposedly it was consumed by an exceptionally large fire. 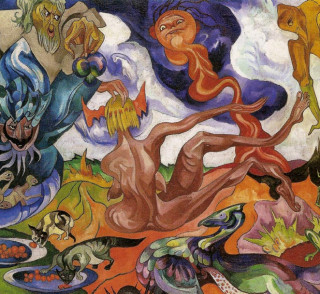 Birds of a Feather
An Overview of Mythical Flying Creatures