In this section artists and critics speak about the works they carry in their minds, and about their creators. About inspirations, artistic shocks and delights. Impressions that get stuck under your eyelids and stay there forever.

“A person can change their views, social position, profession or political camp and remain themselves, but you can’t remain yourself when muffling, or even worse uprooting, your natural aesthetic leanings. That goes too far,” Bronisław Łagowski wrote in his book What Is Better Than Truth? In communing with any work or art, I lower an invisible blind and make my ear deaf to the whispers of experts coming in from the outside. I allow my intuition, unimpressive in other situations, to operate, making the final decision on whether, and how strongly, the delight meter moves.

My consciousness encountered Vivian Maier’s photographs in 2012. They came straight from New York. A friend brought me the hardcover album Vivian Maier: Street Photographer in his hand luggage; he had played an active role in the creation of this work. The strength of the images, which overpowered me more than anything I had seen before, brought the villi of my sensitivity to a delightful stiffness and, combined with the artist’s biography, to mental ejaculation.

Born in 1926 in New York, she spent a significant part of her youth in France, where the roots of her mother’s family tree lay. It was there that in 1949 she started her adventure with photography, continuing it with great engagement after returning to America in 1951. Maier photographed compulsively, but absolutely without the need to confront her works with any kind of viewer. She made a living caring for children; she was a model nanny. Alone, very secretively, she walked the streets of New York, and later Chicago, gathering 100,000 photographs by the late 1990s. Using her bathroom as a darkroom, Maier developed her own film, but in the end gave up this stage of the work. Since then she began accumulating a vast number of negatives in a city warehouse. In 2007, John Maloof, a former real estate agent, paid a small amount at an auction for a box with some surprising contents. Maier died in 2009, before Woolf managed to complete the real detective work needed to find her. The documentary Finding Vivian Maier, which tells this story, appeared in 2013.

I can’t pick just a single photo. Each successive one heightens my admiration. A photograph, especially one that’s not posed, is a moment; an unrepeatable moment on the axis of time. This woman must have had a finger and an eye that were joined with the Absolute, since she managed to click the shutter before the subject blinked their eyes, before the passer-by’s foot touched the street, before the wandering of the sun made the shadows of the buildings change their position. 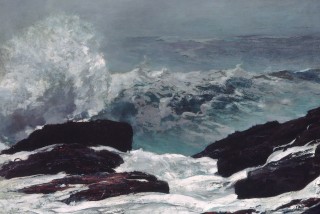 Reading / literature
Forrest Gander’s poem “Immigrant Sea” describes a sensual and intellectual encounter, which ebbs and flows across the page, just like its protagonist’s recognition of himself. Julia Fiedorczuk
Zobacz 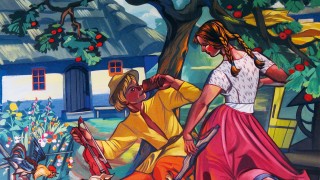 Be Like Anastasia. Life in a New Age Slavic Homestead ♫

Media / Audio
Anastasianism (or the Ringing Cedars) is a new age religious movement that started in Russia. We visit one of its kinship homesteads to find out how to heal the human civilization. Original publication by Ewa Pawlik. Read by Annie Krasińska.
Czytaj
Stach
Szabłowski

Reading / culture
The art of Egon Schiele throbs with the unhealthy vitality of risqué eroticism, which, according to our author, makes him the perfect springtime artist.
Newsletter