Are we alone in the universe? If not, will the aliens turn out to be our friends? I became preoccupied with these questions one August night in Masuria. 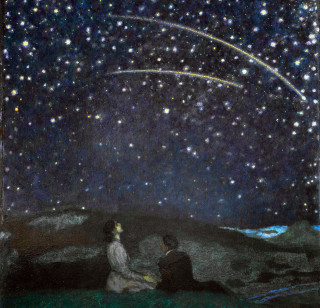 In August, I was with my friends in Masuria, and as expected, an unbelievable number of stars were visible at night. On top of that, we’d witnessed a meteor shower.

One evening, as my friend and I were finishing up our beers, I realized it was no longer evening, but almost four in the morning. She went to bed, and I stayed up alone, but I still felt like some company, so I thought I’d go down to the pier, maybe someone else would be sitting there (spoiler – everyone was asleep, there was no-one there, but that’s not the important part of this story). I walked through the resort looking up at the sky, thinking that maybe I’d see another meteor shower. But I saw something else.

A snake composed of several stars was moving across the sky, not at lightning speed like a shooting star, but slowly. The stars were bright and clear, floating above me towards the horizon in the total silence of the sleeping resort. At first, I thought it was a weird, slow-motion meteor shower, but what kind of meteorite goes that slowly? Then I thought maybe it was some astronomical phenomenon, like a wandering star. And then I thought, maybe it’s a UFO (though the rational part of me knew this was the least likely). So I stood there, staring up at the sky and telling myself that the chances of that were obviously tiny, but still, maybe? Maybe right now I’m looking at an alien spaceship in the form of a golden strip of stars? I was scared that it was about to crash into the Earth and destroy everything – or Masuria at the very least. But the movement of the starlet snake was so calm that the fear soon passed and I was left with a vague sense of mystical elation.

The next day, I told my friend about it and – as they say – the spell was broken (that is, partially broken). My friend assured me it wasn’t wandering stars or a UFO I’d seen, but Starlink, a group of satellites launched into the sky by Elon Musk to provide internet services. And they travel in that very formation, clearly visible, around that time of night.

Okay. So I hadn’t seen aliens. I felt the same disappointment as many before me who also thought they’d seen a spaceship that later turned out to be a plane, a satellite, a tyre on a rope, or something similar.

I once read a text where it was mathematically argued that, given the size of the universe, it’s basically certain that there are other intelligent life forms out there. Unfortunately, I also read another text which argued that this was absolutely impossible. I didn’t understand either argument, so I don’t know which one is right (or if either of them are). Reading the second article, however, I felt disappointed; maybe I could even say I had a slight sense of dread. As far as we know, the universe is either infinite or finite, but still unimaginably large. Could such vastness really be empty?

Of course, when I say ‘empty’, I’m prioritizing all living organisms (especially living creatures with consciousness and intelligence that is somehow similar to ours), because basically the universe is not empty – it’s filled with stars, planets, nebulae, and a lot of other things. Here lies the problem of how all inanimate things exist – the extent to which their way of existence is in some sense incomprehensible to us. We know ‘things’ perfectly well, we see them, we use them. But what is it to be a thing? It’s something like death. Which doesn’t alter the fact that things do exist perfectly happily – that is, of course, not so much happily as neutrally, or in other words: materially (but not materially like us, just as themselves).

So maybe it’s better not to talk about emptiness, but about the fact that these unimaginably large stretches of the universe (assuming that there are neither aliens, nor any divine or supernatural beings) are seen by no-one, and never will be. No-one will ever stand on the vast number of planets and look around, thinking about these planets and their landscapes, or about anything at all, because no-one will ever be there. There are thinking and sentient beings (us and other animals) on only one planet, and this planet is so small in relation to the rest of the universe that it is basically impossible to make any kind of comparison – a grain of sand and Warsaw’s Palace of Culture and Science? No. A grain of sand and Warsaw? No, not that either. A grain of sand and, time to get patriotic, ALL OF POLAND? No, still too small. A grain of sand and the entire Earth? No, the ratio is incomparably greater.

In this context, I think of Pascal’s well-known (i.e. well-known in rather narrow circles of people who are into philosophy, i.e. rather unknown) statement: “The eternal silence of these infinite spaces terrifies me.” Pascal lived in an era when a certain process was ending, in a time of transition ‘from the closed world to the infinite universe’, as Alexandre Koyré describes in his book of the same title. Slowly, gradually, through successive transformations, what had previously seemed large, but still had some imaginable dimensions – a closed, ordered, hierarchical whole – turned out to be an endless cosmos. Interestingly, I remember being told about this by a wonderful teacher, Dr Jerzy Łoziński, in his classes at the Institute of Philosophy at the University of Warsaw. Of the mainstream philosophers, those considered great and famous, perhaps only Pascal reacted with such – quite understandable – terror. Others rejoiced: “Hooray, the universe is infinite, but we know the laws that govern it and we’ll get to know them even better, so there’s no problem.” Pascal, meanwhile, thought there was a problem, and I guess I’m Team Pascal. It’s probably an experience many of us share when we look at the night stars outside the city, we realize how unimaginably far they are from us, what an absolutely unimaginable vastness it is, and we feel strange, scared and alone.

In some ways, the thought of aliens not existing reminds me very much of the thought of divine beings not existing – it gives me a similar impression of incredible loneliness. In any case, aliens – at least any who came to Earth – would have to be much more powerful than us, which evokes further associations with God or other deities. We like to think they’d be friendly (in which case, they could even play some kind of saviour role, like the Doctor from Doctor Who), but of course, there’s also the fear that they wouldn’t be (giving rise to an Independence Day scenario). They would be powerful beings from whom we could expect a lot, but whom we should also fear. The analogy with various concepts of divinity is clear (alternatively, they could be the equivalent of a God who doesn’t care about us at all, and we bear the consequences of his actions completely accidentally – like in Arkady and Boris Strugatsky’s Roadside Picnic). When we imagine extra-terrestrials and God, we often ask ourselves whether aliens would be similar to us, or completely, radically different (this otherness is wonderfully described by Stanisław Lem in Solaris). Or maybe both very similar and very different (as in Ursula K. Le Guin’s sensational The Left Hand of Darkness).

For me, there’s one more feeling that visions of aliens that are similar to us evoke (again, analogous to feelings towards deities): I’d like them to be our friends, and the prospect that they don’t exist is also unpleasant for me in this respect – here is an indifferent, unconscious universe, and in it a total absence of close beings. Of course, you might say: “Hey, Grzesiek, maybe find yourself some friends among humans instead of worrying about aliens,” but if you’ve seen ALF or E.T., you’ll know what I mean. To this day, I remember the moment where Elliott lures E.T. into his room with sweets, or when ALF says “Willie, Willie, Willie.”

It would be nice to have friends like that – both on the individual and the cosmic scale – and that’s probably why we keep sending capsules containing mankind’s achievements into space. I imagine aliens finding those Bach records, Leonardo da Vinci drawings, and whatever else was in there, and they just eat it all up, like Muzzy from Muzzy in Gondoland devoured clocks. One alien bites into Hamlet, another nibbles on Bach, a third is chewing on Ella Fitzgerald, and they all agree it’s completely unpalatable. But if there were no potential recipients, if it turned out there was no chance the parcel would ever reach anyone, that would be a very sad prospect. 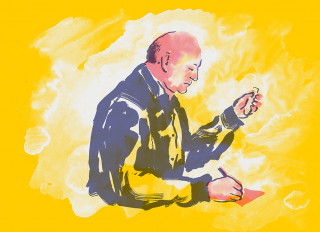 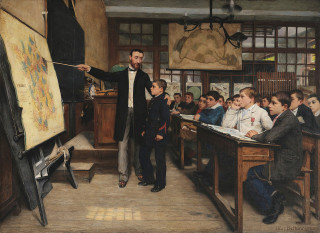 Reading / literature
A poem written in the style of the famous English playwright and poet William Shakespeare. Grzegorz Uzdański
Czytaj 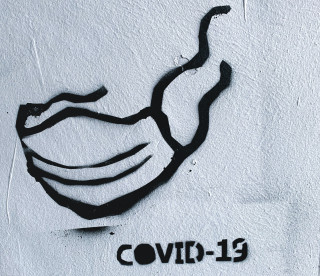 Reading / society
A Backwards Corona Forecast: Or how we will be surprised when the crisis is „over“. Matthias Horx
Newsletter