For a number of years, I believed that sarcastic comments and witty comebacks were the domain of the intelligentsia. My daughter-in-law argues that they are unconnected, but has to admit that only intelligent people are detached enough to avoid being offended by sarcasm. For example, my great friend Zygmunt Kałużyński* was one such person, and Jerzy Vetulani** is undoubtedly of the same ilk, as are many others who are sometimes referred to as “opinion-makers”. Their caustic remarks are of a decent standard, nothing like the crude jokes of contemporary television comedy shows.

In my youth, I used to take the train from Babica to Rzeszów. Those who got on before Babica would look out of the window to see if anyone would be joining them. Once, the composer Zygmunt Mycielski was aboard the train, as he lived on a nearby country estate. When he saw us, he began to boast in delight: “I’ll be going further, to Kraków, because Karol Szymanowski has invited me to help prepare a production of Harnasie in Paris.” My father asked Mycielski: “Are you still composing such ghastly music, sir?” To which Mycielski replied: “Why, of course, sir, and even worse!” That really tickled me, and I have responded to sarcasm with humour ever since. However, I should add that my father really did consider Mycielski’s music unlistenable. 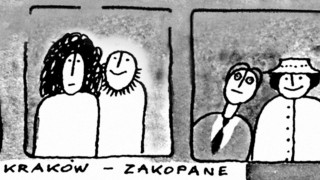 Lessons in Detachment with Szaszkiewiczowa ♫

I have occasionally been the butt of other people’s sarcastic jokes myself. As I recall, before the war (the second one, if anyone cares), one extremely smug young man at a ball in Lwów was assailing me with scathing remarks in poor taste. For example, since I was already rather chubby at the time but adored dancing, the young man quipped that the floor would give way beneath me or the chandelier would fall because the ceiling was shaking so hard. When I eventually tired of all this, I told him that, were we to combine my features with his (i.e. bulk and stupidity), the result would be a jolly fine pig. My joker laughed heartily at first, but stopped once he realized what I’d said. Later, I learned that he’d been telling everyone I called him a pig, and he never bothered me again.

Professor Jerzy Vetulani, however, makes incessant jokes about everyone, including me. When I arrived at one of his birthday parties, he saw me and exclaimed that, since Kika was there, they must have opened up the tombs (and I was scarcely 93 at the time!). I immediately retorted: “Yes, indeed. They’re making room for the professors!” As you can see, the best defence against sarcasm is witty comebacks, but we may use them only if we remain detached from ourselves and our weaknesses.

** Jerzy Vetulani (1936–2017), professor of natural sciences, psychopharmacologist, neurobiologist, biochemist, member of the Polish Academies of Sciences and Learning, honorary member of the Indian Academy of Neuroscience, with honorary degrees from several universities.

Lessons in Detachment with Szaszkiewiczowa ♫ 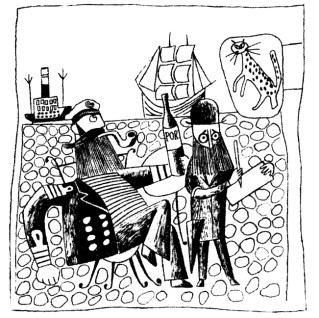 Coffee Was Discovered by Goats
The Story of the Bean

Reading / science
Where does coffee come from? An article about the origins of the famous brew from the 1949 edition of “Przekrój”. Marian Dienstl-Dąbrowa
Newsletter