To write about silence – what a paradox. “When I pronounce the word Silence / I destroy it”, wrote Wisława Szymborska in The Three Oddest Words (translated by Stanisław Barańczak and Clare Cavanagh).

What could be said about silence except that there is less and less of it, just as there is less and less darkness (excessive night-time lighting due to numerous sources of artificial light is the cause of the ‘light pollution’ hindering astronomical observation of the sky, but it also interferes with the well-being of animals and plants adapted to living in darkness during the night)? In the civilized world, it is almost never completely dark – and never completely quiet. Like everything that is natural and rare, silence becomes an exclusive commodity – we leave the city to find ourselves away from its clamour, to wind down and rest. Silence is a luxury, being ‘out of reach’ (with no access to the internet or a phone) – an extravagance few of us can afford, while there are fewer and fewer places where it is possible to really ‘cut oneself off’ from the world.

My situation as I begin to write this piece: early morning, summer-time, the Mazovian countryside. It is warm and pleasant at this hour, but later it will be hot and sticky. I have opened the windows, birds’ voices can be heard (sparse now that spring is long gone), as well as the silent, almost soothing sound of cars passing in the distance. The mood of the moment makes me think of Nathaniel Hawthorne meditating in the 19th-century New England woods, for whom the sudden whistle of a distant locomotive intensified the sense of being removed from civilization. The unobtrusive hum of engines constitutes a kind of frame for my relatively wild surroundings; for the calmness of this morning. I can say to myself: here I am, away from it all, life is good.

Reading / feuilleton
To look up at the marvellous, shape-shifting clouds costs nothing, but can make you feel incredibly rich.

But suddenly the idyll gets interrupted by the loud whirr of a lawnmower. A moment later it is joined by another and yet another one, until all space around me is momentarily filled with noise. One needn’t be a wacko to become irritated (to put it mildly!), especially taking into consideration that the obstinately mowed stretch of land already looks like a desert rather than a lawn. My morning calm has gone to hell. I close the windows and go back to writing, but my enthusiasm is gone. To write about silence with the accompaniment of three lawnmowers – what does that say about the world?

It’s not just about my interrupted idyll; not about the mere fact that noise has ruined a person’s peace and concentration. Too much noise is simply harmful to humans and other beings, causing, among other things, stress; disrupting blood circulation, heart rate and sleep; interfering with navigation (in some animals); causing damage to hearing; lowering the effectiveness of learning (in human children). Anthropogenic noise is a form of pollution, both on land and in the sea. It is caused primarily by machines and cars, but also by household equipment or loud music. As demonstrated by the Canadian composer and environmentalist Raymond Murray Schafer, noise can also be a manifestation of power, for instance when people modify their cars to be insanely loud. Making noise can constitute a form of aggression towards other people as well as animals. The soundscape then becomes a battlefield – let us remember this the next time we want to play loud music on a beach or rent a quad bike to ride in the woods.

But perhaps we don’t really like silence? Maybe we are just annoyed by sounds emitted by others because we would rather keep our place centre stage? “Modern man has lost the option of silence,” claimed William S. Burroughs, one of the most brilliant, if also eccentric American writers of the second half of the 20th century, whose paranoid tirades about the word virus sound uncannily adequate today. In The Ticket That Exploded he wrote:

“Try halting sub-vocal speech. Try to achieve even ten seconds of inner silence. You will encounter a resisting organism that forces you to talk. That organism is the word.”

It seems like Burroughs understood this quite literally: the word is a virus from outer space, attacking our bodies and feeding on our lives. “Modern man,” according to the author of Naked Lunch, is completely enslaved, manipulated and programmed by the word. The word turns us into automatons – automatons for speaking. When we read this as a metaphor, it turns out to be frightfully accurate: try to achieve 10 seconds of inner silence. What happens?

The ‘word’ would then be a ‘virus’ implanted in our bodies by a techno-civilization, forcing our bodies to make noise. I started from noises projected outwards and received by others as loud sounds, while the quote from Burroughs is about inner noise – the overproduction of meanings. But perhaps the two are related to each other as symptoms of the same deeper inclination? The inclination to generate excess – be it an excess of goods or content – and, as a result, waste. The fundamental difference between civilized humans and other animals is that we are the only ones who produce garbage that can’t be processed by nature. Noise is waste; as such, it is a problem for our ecosystem. But the same applies to every automatically reproduced word (sentence, opinion) – multiplied in our own mind, on Facebook, on the wall of a building, or the first page of a daily paper.

To become a source of silence – for oneself and other beings – even as the lawnmower is running outside – might that be possible?

Reading / feuilleton
To look up at the marvellous, shape-shifting clouds costs nothing, but can make you feel incredibly rich.
Czytaj
Paulina
Wilk

Reading / feuilleton
On 14th June 2019, 13-year-old Inga Zasowska started her climate strike outside the Polish parliament. It’s children like Inga and Greta Thunberg who can bring us hope – if only we would listen to them.
Czytaj
Paulina
Wilk

Reading / society
We imagine a world in which politicians read books, leading to a greater capacity for imagination, truth, and caring for the country.
Czytaj 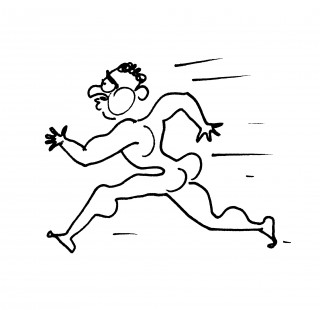 Magazine / society
Our correspondent’s sporting highlights from the ancient Olympic Games, including the greatest Olympian of all time, corruption and illegal gambling, and a healthy dose of bulls’ testicles. Michał Szadkowski
Czytaj